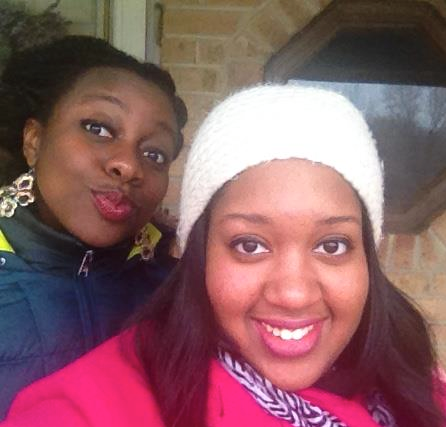 As mentioned by my friend @kcameraready, this past Valentines Day weekend was full of adventure! As single ladies—well, most of us anyway—we spent the holiday together, instead of lamenting in our ‘singleness’ on this sappy romantic day (who needs flowers and heart-shaped balloons anyway). As @kcameraready so eloquently mentioned, “we laughed, had a few heart-to-hearts over some drinks of sparkling cider and chocolate covered strawberries, ate great food, had some Jesus time…” and literally stayed up all night simply talking about nothing and everything. I didn’t realize exactly how much I missed having these moments with my best friends, but I am so blessed to have our friend group even three years post-college.

So together we spent the weekend celebrating our friendship and making toast to the many years we have yet to come. And, of course…we just had to see Fifty Shades of Grey #noJudging @kcameraready asked that I write a review, so here it is:

Although I read and enjoyed the Fifty Shades of Grey (FSoG) books, I did not have high hopes for this movie. Because of the subject nature, I did not think that the film would hold true to the storyline. Let’s be honest, the first book is dirty, and being the good girl that I am, I skipped through a lot of the pages while reading. I was wrong! Even though some scenes were purposely absent (and with good reason), the Fifty Shades of Grey movie is a true ‘R-rated film’, and for the most part held true to the book…sometimes too true. You know how some things sound better in your head than said out loud? There were a few of those moments in the movie. Laters Baby? Yes, this definitely sounds better in my head than awkwardly said out loud by Jamie Dornan.

I’ve heard many complaints about Jamie Dornan’s acting…that he lacked all emotion. It’s been a while since I’ve read the books, but from what I can remember, Christian Grey is described as a cold, emotionless, somewhat angry individual. I feel Jamie Dornan portrayed his character almost to a fault.

I was pleasantly surprised by Dakota Johnson’s acting. In the commercials, her part seems hokey and dare I say, ditzy? There didn’t seem to be depth to her acting. But again I was wrong. Dakota played the part well and was able to convey Anastasia Steel’s thoughts and emotions as a virginal young adult woman. That could not have been an easy role to play, and she handled it like a boss. I’ve heard some comments about her using an outdated phone in the movie, which some attribute to how much the movie sucked (in their opinion). If you read the books, you learn that Anastasia is very old-fashioned and not overly concerned with keeping up with the time. Yes, everyday people still use flip phones.

To address the elephant in the room, I do not support the dominant/submissive relationship displayed in the Fifty Shades of Grey Series. And let me make it clear, seeing this movie in no way negates where I stand in my faith…I am a Christian through and through. With that being said, I do feel that people are quick to judge a book (and, therefore, the movie) by its cover. Yes, it is vulgar, really vulgar, but beyond all the sex is a story of emotional hurt, the ‘baggage’ it creates, and how life can transform into something better once you address the issue. Granted, all this is hard to understand if you simply watched the movie without reading the books…especially books 2 and 3 as they really dive into this. Without giving too much away, the series serves as a glimpse into the lives of many, many hurt people. It shows that we all have a past that form us into the beings we are today, some for the good and others for the bad. We all have ‘sins’ shaped by the ‘sins’ of others. Overall, the FSoG Series shows how this can be overcome with help, guidance, openness, and acceptance.

o the movie, I give it a B-. It was far better than I expected. It held true to the book—almost word for word—that in some cases made the movie hokey. I wish it would have delved more into Christian’s background, perhaps making him seem less ‘creepy’…okay maybe not, but I do feel that doing so would have allowed us to understand him more. Hopefully, they’ll get there in the next movie. Also, it is important to remember that the FSoG series is originally a fanfiction of the #Twilight Series. Think about, replace Christian and Anna with Edward and Bella…the general storyline is the same. FSoG reads like a classic, well-written fanfic story, and I think that weighs heavily on how the film is viewed/rated.

So no, the movie was not perfect, but I still enjoyed it and I am looking forward to the next two films. What made it even better is that I saw the movie with two of my closest friends. It was hilarious seeing @kcameraready surprised by different scenes…she didn’t know what to expect having not read the book. All-in-all, this was a class-A Valentines Day weekend that will forever go down in the ‘history book’ as the greatest weekend ever!!!

Dating SOS: I need your help, dating is leaving me clueless…